I’ve been hacking away at my side project Macaque today. It’s quickly becoming the world’s most over-engineered to-do app. At the moment it’s categorising primates:

As you can see, my big ideas for Macaque focus on design but I am building it end-to-end. For the supporting back-end I’ve spent the weekend writing and testing an API. I could have thrown together a diabolical concoction of PHP and MySQL and been done with it. However, since I genuinely plan to use this app, I’ve opted for an ultra-trendy Node solution.

My app has a very simple RESTful API that interfaces with a Mongo database. My API can retrieve, edit, and add items to one or more lists. That’s innovation right there. You can follow my code progress on GitHub.

In fairness, It’s probably the least impressive API one could possibly development but that doesn’t make it any easier to test. Even if the front-end wasn’t lacking in functionality at this stage it would be a tedious way to find bugs. Inspired by my old office mates at UVd and Browser, I’ve spent some time implementing test driven development into my workflow.

For this I’ve used Mocha to write a series of tests for my API. Each test calls the API and then checks the returning data. For example, to make sure /api/lists is returning an array:

When I run all tests from the command line: 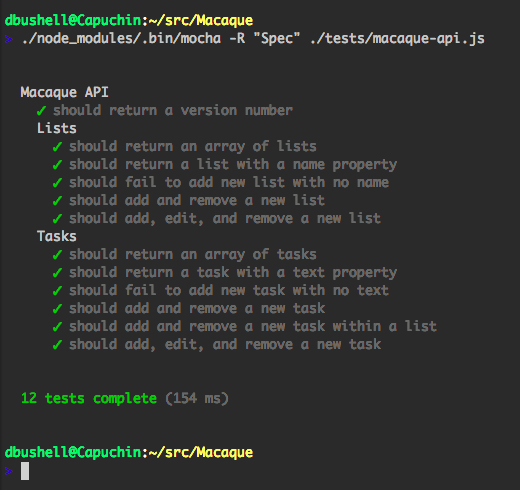 This effort has already paid dividends when I came to refactor my API to make use of Mongoose — a library that provides schema, data validation, and generally easier coding. I had to rewrite much of my code but running the tests again gave me instant confidence it was correct.

I’ve already got Ember working with the API to output list and task templates. It’s now time to focus on design of the front-end user interface.

Following my experience with Mocha I’m hooked on automated testing and I look forward to bringing it into the browser with other frameworks.